Letter to Boards of Education

I am the parent of three school aged children, two of whom have Type 1 Diabetes and I want to take a moment to educate you about a growing concern that I have about the health and well being of the students in your classrooms. Perhaps you don’t know, but November has been designated as National Diabetes Month, and November 14 was World Diabetes Day. The designation of this month is based upon some staggering statistics that, in my opinion, are not being taken seriously by our educational system – the place that our children spend the vast majority of their waking hours – and you are helping the problem grow worse.

According to statistics published by the Juvenile Diabetes Research Foundation and the American Diabetes Association there are currently an estimated 18.2 million people in the US who suffer from Diabetes…that’s 6.3% of the total population. Further, they estimate that in the next 15 years another 44 million people will be diagnosed. Of those, as many as 3 million have Type 1 diabetes and more than 15,000 kids will become newly diagnosed in 2011…that’s one out of every 500 children under the age of 18. Among those 3 million kids are two of my three sons, Matt and Jake…and they’re in your schools!

So why am I picking on the schools? To be honest, I am perplexed and I need your help. In 2003, New Jersey (where I live) launched its Healthy Choices, Healthy Kids Campaign. Among the standards set in that campaign are the following:

To any parent concerned about the health of their children, these standards ought to seem reasonable. However, for some reason nobody is paying attention and I want to know why. So, I have a few questions:

1. Why are my children allowed to spend their lunch money on candy, ice cream and soda, all of which are prominently displayed and sold in my children’s school cafeterias?

When my kids are at home they don’t get to have these things as routines snacks. They are reserved for special occasions and are not part of the daily diet. In fact, my kids love when we have freshly cut fruit and veggies on the table when they get home. I wonder whether our society would solve the ever-expanding (pardon the pun) problem of childhood obesity if these choices were systematically eliminated from their lunchroom options. If the school took a stand and eliminated 100% of this stuff, what would be the harm, and who would have the gumption to actually complain about it? The life a a kid with Type 1 Diabetes revolves around so many factors…candy and treats at school should not be one of them!

2. Why does nearly every day need to be a “special day” in the classroom, where parents are permitted to send in cupcakes, cake, brownies, candy and other  “treats” that have little or no nutritional value?

I’m not sure about you, but I see no need for my child to have cake and brownies at morning snack time, followed by a Pepsi and an ice cream taco in the lunch cafeteria an hour later. When I was a kid, we exchanged Valentines Day cards with our classmates and I would come home with a stack of notes asking, “Will you be my valentine?” My kids, on the other hand, came home with a bag of candy (contents shown in the photo below) that weighed nearly 2 pounds last February…it’s just not necessary! I must say that we are fortunate this year, because Jake’s teacher gets it and the junk in the classroom has been toned down. 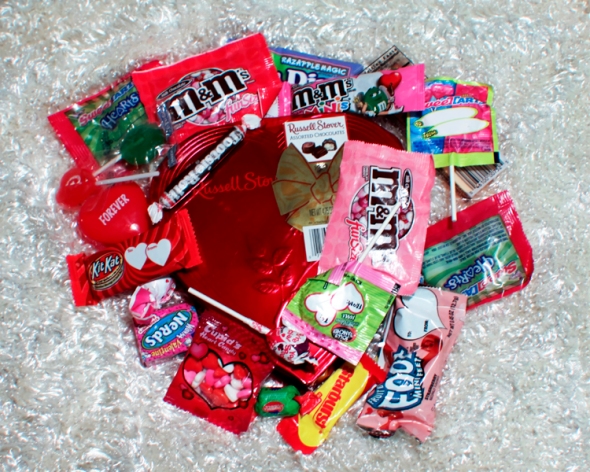 Note to school systems: Please don’t call parents and complain that our children are hyperactive and out of control in the early afternoon and then seem sleepy and aloof by the end of the day when you have just provided them a week’s worth of sugar to rev their engines shortly after which they crash…it’s the system’s fault, not ours and not the kids!!

3. Why have seven (7) years gone by and no significant changes have been made based upon the aforementioned Healthy Kids recommendations?

It seems odd to me that my children learn about the Food Pyramid in health class, yet in the very building where they are taught about the relative nutritional value of their food choices, they are able to make every bad choice that just about any kid would make when their parents aren’t around. How ironic that my kid could take a test in health class and potentially get it wrong, when the poor food choice behaviors are being reinforced by the schools at lunch…right before that test.

Please understand, making these changes will not cure the Type 1 Diabetes that impacts my children…I know that. I’m also not blaming the schools for my kids’ disease. However, it is a huge, yet preventable, problem when my son has a blood sugar of 500 at the end of the day – which may easily have impacted his performance in the classroom – because he bought an ice cream and did not take any insulin to cover it. You see, Matt is a teenager and given a little freedom he does not always follow the rules and we do not know that he has done stuff like this until we download his pump and ultimately find that his HbA1c has gone from 7 to nearly 10 (yup…embarrassed to say that happened last year)!!!. That’s why we need your leadership and your help!

So, in honor of Diabetes Month and World Diabetes Day, I am asking you to please help make our schools a healthier place for our children. Please pay attention to the 2003 recommendations. Please help my kids avoid having the long-term complications of a life with Diabetes that include heart disease, kidney disease, blindness, neuro-vascular disease, and more. Please become a partner with parents in educating and reinforcing healthy life-styles by fostering them in your buildings every day. If you can help me do that, I’ll stop picking on the school systems! Thank you.

Scott Kasper, on behalf of many concerned parents

Oh – by the way – if you’re a concerned parent feel free to share a link to this entry with whomever you think might listen!!