Quick update from Jerusalem…we have very limited internet access again, so I had to search out a public wi-fi zone to post this update!!

Sunday Aug. 1: As you know we have been based in Yavne’el, and have been touring using a Toyota Corolla that we rented when we first arrived. Before we got here we were advised that having a car in Jerusalem was a huge mistake….too much traffic and not enough parking….sounds kinda like Boston or Philly. Because of that, my father-in-law hired a minibus with a driver for the few days that we will be touring here. It beats having to hail several cabs any time we need to go some place, and it certainly beats having the cars.

Anyway, David and the mini-bus arrived at the house at 0930…right on time. To be honest, we thought he was going to be there at 10, and for the first time EVER we were all packed a ready to go early!!! So we packed up the bus and hit the road for Jerusalem.

There was one place that we had not seen yet in the Galilee, and it happened to be along the way so we took a slight detour and stopped at a Crusader castle called Belvoir Castle (that’s French….it’s Kohav HaYarden in Hebrew) that was built in 1168 by the Crusaders to protect the lower Galilee against the Muslims. In 1189, after a siege that lasted for more than a year, the fortress was surrendered to Muslim control. The ruins of this castle are in remarkably good shape. It was stunning to see some of the rooms that were left in tact, the protective moat, etc. 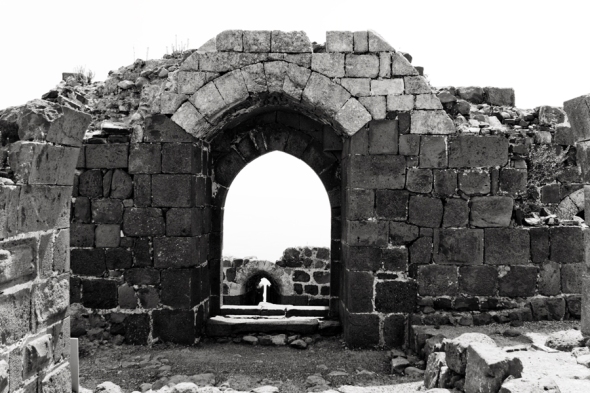 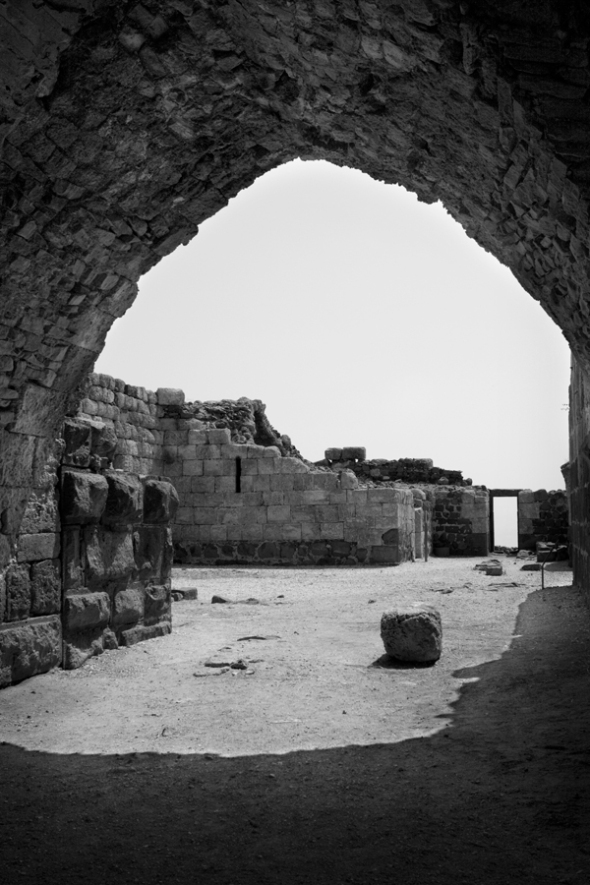 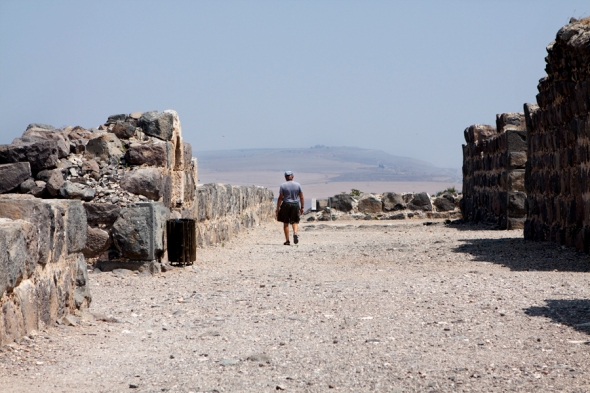 After walking the ruins in the blazing sun for about 30 minutes, we hit the road again. Just like our trip to Eilat, we took highway 90 through the West Bank again. One noteworthy event that took place is that we came upon a horrible crash along the way. Based on what I was able to size up as we drove past is that it was a head-on collision with at least 4 victims. The driver of the car that sustained the most damage was still in what was left of the driver’s seat and appeared to have his head still in the windshield. Other victims had been removed from the car and were lying on the roadside being attended to by the dozens of passers by who stopped to help.

This brings up some interesting logistical and moral issues. First, why did we not stop to help? There are several reasons. First, this was in the West Bank, and travel advisories indicate that, for safety reasons, stopping is a bad idea. Second, but the time I was able to see what had happened and then tell our driver that I could perhaps lend some assistance we were past the incident. Finally, there were literally dozens of people already crowding into the small vehicle and surrounding the others. For me to stop and say, “hey, I’m a paramedic. Can I help” in English would not have likely been entirely successful. As it turns out the ambulance were not far behind.

This brings up some other issues. This took place on highway 90 in the West Bank. The roadway is controlled by the Israelis (and in fact there were Israeli police at the scene), but all of the communities are Palestinian controlled, and the ambulances that responded were Palestinian, not Israeli. The nearest Israeli hospital was more than an hour away. So how would this all play out? Would the Palestinians take good care of Israelis? Would they take them to Israeli hospitals? What would happen? These are all questions to which I must obtain answers. But again, there is cautious optimism that an Arab will render good medical care to an Israeli Jew in need of help. What could be the larger, big world impact of situations like this?

Sorry for the long diversion. We made our way through the West Bank and to Jerusalem. Along the way we passed many Bedouin villages that look like sprawling shantytowns built in the hillsides along the highway. The goats and camels (see bottom left of photo below) were free roaming. I have no idea what these folks do for trade, to earn a living, for food or water…I am told that they travel to the near-by cities and roam the streets begging and picking pockets. I’m not judging…just reporting what I am told by others. 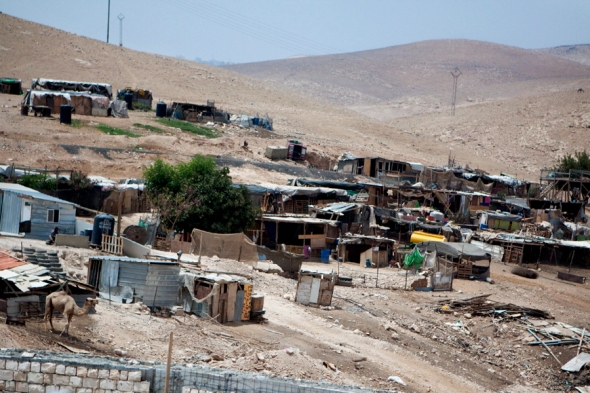 Once in Jerusalem, we met Rachel’s brother, Adam, and his family for lunch. They had just arrived from Newark. My nephew Noah will be joining Matt for a Bar Mitzvah at the Western Wall on Monday. We had lunch, the boys swam and practiced their Torah readings. Swimming was remarkable for two reasons. First, the pool is on the 8th floor and a fairly cool view of the old city. Second, and I will say in advance that I will not dwell on this because it will just get my blood boiling, is that Matt jumped in the pool along with his brand new continuous glucose monitor…NOT waterproof…not warranteed for water damage…UGH!!!!! After swimming it was off to Adom for dinner. Adom was a kosher meat restaurant that had been recommended. Adam was thrilled; as it is not often that he gets to enjoy meat when dining out…so he picked the kosher beef bones clean!! 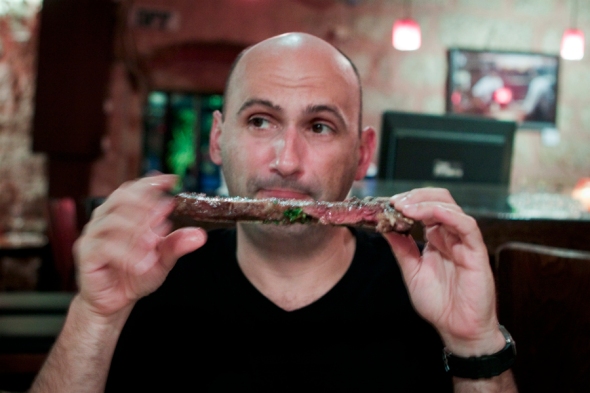 It was a late dinner, the kids were all tired and we had to wake at 0600 to start our journey to the Western Wall for the Monday morning Bnai Mitzvot…so it was off to bed in anticipation of the simcha to come in the morning.

Vacation within the vacation (Part 1)

Sorry for the gap in entries over the past few days….as I anticipated, I did not have internet access in the hotel in Eilat. So let’s catch up…before I do, however, I want to extend a Happy Birthday to my brothers!!! I hope you enjoyed however you celebrated!

Thursday July 29: We made our way from Yavne’el, by the Sea of Galilee in northeastern Israel, to resort city of Eilat, on the Red Sea in southernmost Israel.  Those of you from work may appreciate the first photo of the day… just after we left the house and stopped to grab a few things from the store, I had the opportunity to chat with a local paramedic…this is his vehicle: 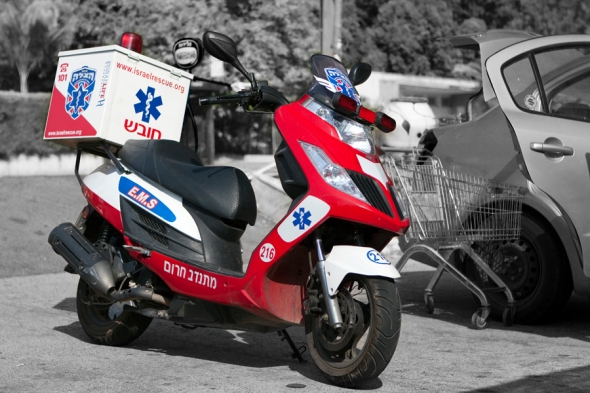 After stocking up for the ride, we were off! With a few stops for food and bathrooms we made the 500 km journey in just less than 5 hours. It really wasn’t that bad and the kids were remarkably well behaved thanks for fresh charges on the game boys, portable play stations, and iPods!

The first half hour of the drive was totally uneventful. At about the 30-minute mark we arrived at the checkpoint blockade. Huh??? Checkpoint?? Blockade?? We decided to make our way to Eilat by traveling Highway 90. This is clearly not the Mass Pike or New York State Throughway. Road 90 is a 2 lane road that makes its way from the northern most town on the Lebanon boarder all the way to Eilat, the southern most city in Israel. To complete that route, however, it travels directly through the Palestinian controlled West Bank….also known here in Eretz Yisrael as Area C.

Funny thing about Area C. As soon as you pass through the blockade at the boarder, the GPS device stops navigating and alerts you that you are now traveling in Area C. It continues to indicated that the car is traveling Road 90, but does not display and turn by turn navigation and does not display any of the surrounding road ways. I took this as a sign that this good Jewish American family should stay right on Road 90 and not stop for anything until we pass through the southern checkpoint (pictured below) and back in the safety of Israel. Not only did we do just that, but Rachel called her mother just to let her know that we were no longer in the West Bank….what a mensch!!! 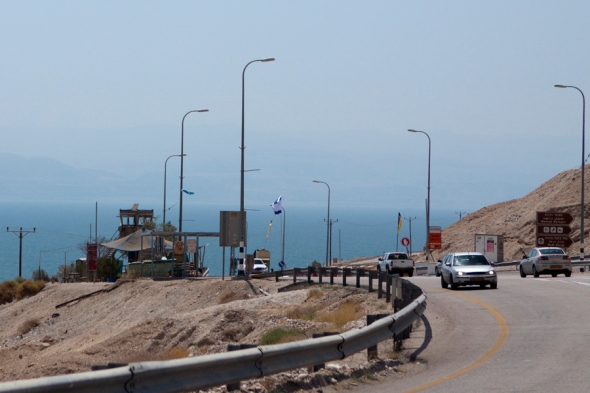 I must say that I was a tiny but nervous driving this area, but more so I was excited to have done it. I think that Rachel thought the same. It gave us an opportunity to talk to the kids about politics, religion, and the clashed that result from the conflicts between the two. We talked about history and current events, including the recent Israeli boarding of the “humanitarian aid” boats off the coast of Gaza. It’s one thing to read and watch news about this stuff when in the US. It’s quite another thing altogether to discuss this stuff here, in the heart of it, where it’s real every day. I think the kids have learned some interesting and less sheltered perspective about these issues, and that’s a good thing!

Back to the journey…Shortly before leaving the West Bank we hit water!! We had arrived at the Dead Sea (photo below). It was remarkable in color, but even more remarkable in how far it has receded! The plains that were clearly once the bottom of the Sea are now vast in size and completed desolate. I am guessing this is recent as none of the vegetation that grows along the older shores have invaded this new land yet. 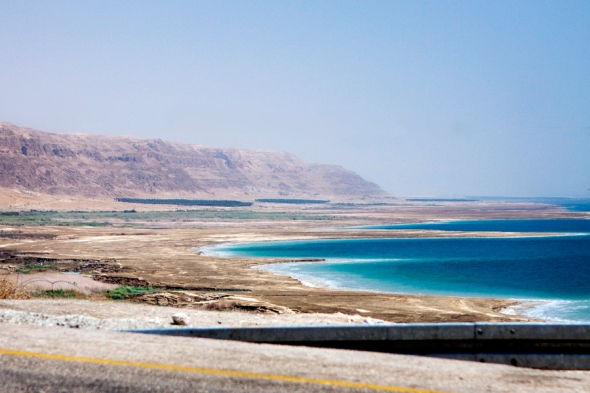 The scenery in the Negev (Israeli Desert) was like a lunar landscape, but at the same time was beautiful!!! The geology changed along the way, but the one constant was a complete lack of plant life…nothing…only rocks, gravel, dirt, and sand…for hundreds of kilometers. 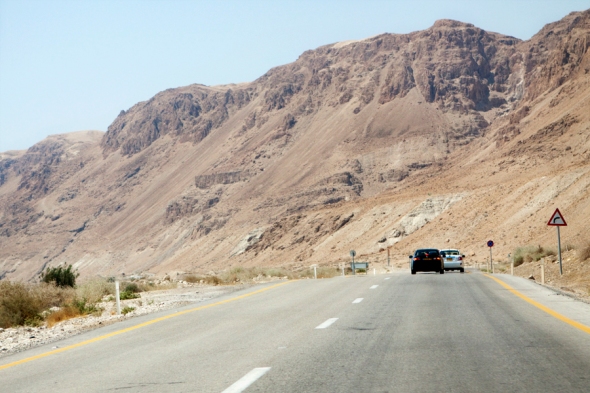 Then, all of a sudden, through the barren landscape appeared an oasis…in the distance was Eilat. We had arrived and it looked beautiful.  It was interesting to see more villages on the Jordan side of the boarder (first photo below) as we got closer to the sea. Arriving in Eilat was, in some respects, like arriving in Las Vegas…out of the desert pops a cluster of hotels with a singular purpose, which in the case of Eilat is a focus on aquatics of the Red Sea. 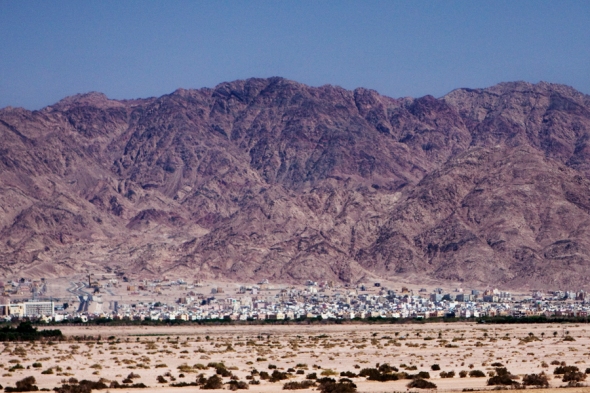 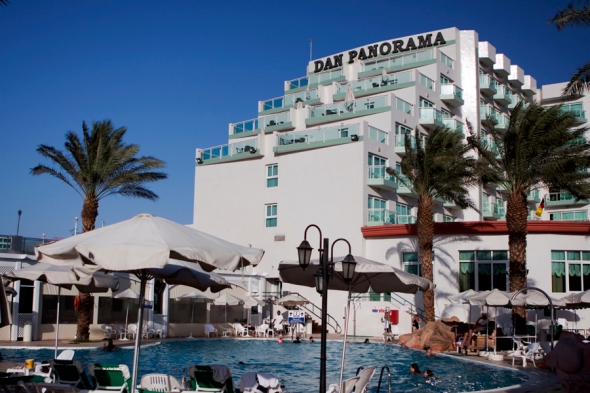 We checked into our hotel and simply spent the remainder of the day by the pool (photo above). It was hot, but there was a breeze. Unfortunately it was not a cool breeze and I can now imagine what it feels like to be inside of a convection oven. After swimming and a quick shower it was off to dinner then to bed.

Stay tuned for Part 2, which will come after dinner in a few hours….I hope….if I don’t collapse from exhaustion first.